For evolution you need only three ingredients;

And of course a lot of time.

Variation means that the organisms are different from each other in some way. This can be in any way; in appearance, intelligence, size, immune system, genes. Genetic variation arises from mutation.

Inheritance of the variation means that the offspring of parents are more similar to the parents than expected at random. The traits of the parent should be passed on to the offspring in some degree.

Selection means that not all the individuals in the population produce offspring. Some die before they reach reproductive age, others never produce viable offspring. Which individual reproduces is not random, but depends on the set of traits of the individual, the variation (see ingredient 1.) In natural selection the traits are selected by the environment. In artificial selection a researcher or pet breeder is determining which individual will reproduce. 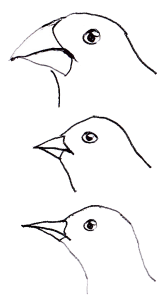 The result is evolution; in every generation the set of traits in the organisms changes. It changes very slowly, but over time the changes accumulate. The species start to look different and get more adapted to their environment. One species can split into two different ones that are adapted to completely different environments. A species can continue looking the same for millions of years by selection that weeds out all novel mutations (this is called balancing selection). It’s still evolution.