I have written this article in 2008 about the research project I did for my Bachelor of Science, Evolutionary Biology Program, at the University of Groningen. You can download the full version as PDF below.

Abstract of: “The sex determination mechanism of the parasitoid wasp Nasonia vitripennis“

There are many different sex-determining mechanisms known in the animal and plant kingdom. In some species an environmental factor like temperature determines the sex, in others it is a gene or chromosome.

A special way of sex determination is present in the Hymenoptera, the animal group where bees, wasps and ants belong to. From haploid unfertilized eggs males arise, from diploid fertilized eggs females arise. But haploid females and diploid males are also found in this species, albeit rarely. A series of experiments also conclude that fertilization does not influence the sex.

In honeybees the so-called Complementary Sex Determiner (csd) locus is found. A great variaty of alleles are found on this locus. Heterozygotry on this locus results in the formation of a female individual, while hemizotry or homozygotry results in a male individual. In this way diploid males can arise if they carry only one type of allele. In other Hymenoptera species like some types of wasp, the csd is not found. These species have an other system for determining the sex, since inbreeding does not change the number of diploid males. The commonly as an model organism used parasitoid wasp Nasonia vitripennis is one of the wasps where the sex determination mechanism is not fully understood. Because this wasp is used often in the laboratory as an model organism, it is important to learn more about it.

To gain more insight in the sex determination mechanism of Nasonia vitripennis, mutant strains of this organism are used. A sex determination mutant strain is found in a wild population in Canada (CD12). This strain produces so called gynandromorphs. Gynandromorphs are uniparental ‘male’ individuals with an anterior/posterior gradient of female external characteristics. The body parts that show these sexual dimorphic exterior are the antennae, the wings, the legs and the abdomen. If a body part is feminine, all anterior body parts are also feminine. This mutant strain is cultivated in the laboratory and directionally selected for more gynandromorphs. The allele that is probably partly responsible for the gynandromorphism in this strain is called gyn1.5

Want to read the whole article?

Just download the full PDF for free: Gaining insight in the sex determination mechanism of the parasitoid wasp Nasonia vitripennis 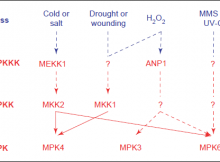 I have written this article in 2009 as part of my Bachelor on Evolutionary Biology at the University of Groningen. This essay aims at providing some basic information about Arenicola… 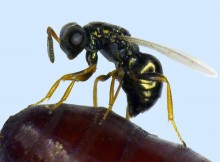 I have written this article as my Master Project for the Master Ecology and Evolution at the University of Groningen in 2010. You can download the PDF below…. 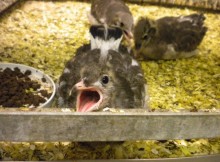 I wrote this article as part of my Bachelor of Science study at the University or Groningen in 2009. You can download the whole PDF below for free….